Ellenbrook is a northeastern suburb of Perth, Western Australia, about 21 km from Perth's Central business district (CBD), located within the City of Swan. Ellenbrook, and its neighbouring suburbs of The Vines and Aveley, are unusual for Perth in being a significant distance from neighbouring suburbs. Given this relative isolation and the distance from the CBD, Ellenbrook has been designed and developed as a self-sustainable community. It is envisioned that Ellenbrook will eventually become a satellite city, with a population of 80,000,  however a more modest population prediction of 30,000  has been set for c. 2012. At the time of the 2006 census there were 15,170 people living in the town and neighbouring areas of Aveley, the Vines and Henley Brook.  In June 2010 Rita Saffioti MLA stated that the population of Ellenbrook and neighbouring areas now stood at "over 25,000".  The ABS quotes a population for Ellenbrook and the vines of 31,173 as of 30 June 2011  . Current City of Swan estimates forecast the population to increase to 37,150 by 2016 and 44,185 by 2021. Population in the City of Swan's nearby Urban Growth Corridor (roughly east of Whiteman Park) is forecast to reach 14,668 in the same period.

Must See Places in Ellenbrook, Australia

Ellenbrook takes its name from Ellen Brook, a tributary of the Swan River which runs to the east of the suburb. Ellen Brook was named after Ellen Stirling, the wife of Captain James Stirling, Western Australia's first governor.

The developer was the Ellenbrook Joint Venture — a partnership between the Department of Housing and Works and Morella Pty Ltd.

The Urban Development Institute of Australia (UDIA) produced a fact sheet  providing details about the development:

Ellenbrook is a planned community, and is being developed in phases called "villages".

Currently, there are six villages. The first, Woodlake Village is also currently the largest. Woodlake Village was built on the site of a former sand quarry.  The lowest point of the open-cut mine became the central lake and feature parkland, and the high points of the mine were set aside for the area now known as Woodlake Rise. Construction commenced in 1994, with the first home completed in 1995. Woodlake Village was followed by The Bridges, centred on Lake Fresca, then by Coolamon, Morgan Fields and Charlotte's Vineyard. Malvern Springs is the sixth village and was recently opened.

Ellenbrook is centred on a commercial area called the Shops. The development of the Town Centre is in its early stages, but already contains the largest Woolworths in the state.  The Shops recently underwent a $100m expansion, which opened on March 17th 2011. This was a very significant expansion which saw the number of shops increase to about 80 including a Big W and a Coles supermarket.

The Town Centre is being developed in three phases with the final stage (Stage 3) likely to be a number of years away, the timing being dependent on the success of Stage 2 and the growth of the suburb. 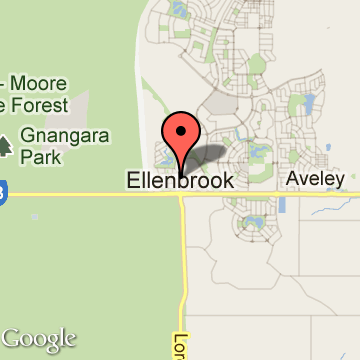