The first people known to have inhabited the area were the Binjareb tribe of the Bibbulmun Nation. These people lived well off the land, which abounded in fish, game, berries, and fruits. The locality then was known as Mandjoogoordap, which translates as 'meeting place of the heart'. After European settlement the name was adapted to Mandurah.

In 1828 'Swan River Mania' inspired Englishman Thomas Peel to bring a number of workmen, equipment, and stores to Western Australia in exchange for a grant of land. The contract stipulated that Peel must arrive in the colony by 1 November 1829, however the ship Gilmore, carrying Peel and his followers, did not arrive until mid December and Peel's original land grant was forfeited.

Peel built a small settlement named Clarence, at what is known today as Woodman's Point to await the arrival of two other ships the Hooghly and Rockingham which carried settlers, equipment and stores also belonging to Peel. After many mishaps and plagued by ill health Peel eventually brought his remaining settlers to the area known today as Mandurah. At that time, Mandurah was a day's journey by sea and two or more days by horse and cart, travelling across very rough country. The area remained isolated until 1843 when a road was built and a ferry punt constructed across the estuary.

Must See Places in Mandurah, Australia

The Noongar (or Bibbulmun) people, who inhabited the South West of Western Australia, named the area Mandjar ('meeting place'). After European settlement the name changed, possibly due to mispronunciation, to Mandurah.In December 1829, Thomas Peel arrived in Western Australia from the United Kingdom with workmen, equipment and stores on the ship Gilmore. He had financed the trip in exchange for a grant of land in the Swan River Colony. Unfortunately for him, the contract stipulated that he was to arrive by no later than 1 November 1829 and, as such, his original land grant was forfeited. Undaunted, Peel built a small settlement named Clarence south of the Swan River colony at what is known today as Woodman Point. Many problems with the settlement along with Peel's own ill-health led him to lead the remaining Clarence settlers to the area known today as Mandurah. Thomas Peel died in 1865 but Mandurah continued to grow, albeit very slowly, over the years leading to the 20th Century.

Since its founding, Mandurah was administered under the Murray Road Board until 1949, when the Mandurah Road Board was established. However, dissension within the board during the 1950s saw it suspended while Commissioner Richard Rushton oversaw the town's affairs. On 26 April 1960, the Mandurah Road Board was reconstituted, and on 1 July 1961, in accordance with the Local Government Act 1960, the Shire of Mandurah was founded.With a mining boom in nearby Pinjarra, Jarrahdale and Wagerup and an industrial boom in Kwinana combined with an idyllic lifestyle by the coast saw Mandurah grow rapidly, and on 1 July 1987 was upgraded to the Town of Mandurah. Just three years later on 14 April 1990. Mandurah became the fifth non-metropolitan settlement in Western Australia to become a city. 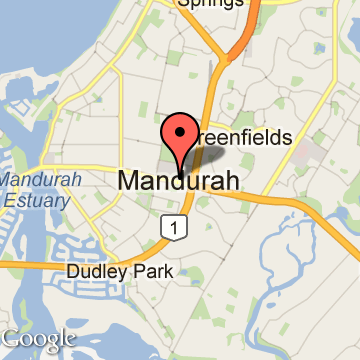