The city centre is at the northern edge of Princess Royal Harbour, which is a part of King George Sound. The Central Business District is bounded by Mount Clarence to the east and Mount Melville to the west. The city is in the Local Government Area of the City of Albany.

Albany was founded in January 1827 as a military outpost of New South Wales as part of a plan to forestall French ambitions in the region. The area was initially named Frederickstown in honour of Prince Frederick, Duke of York and Albany. In 1831, the settlement was transferred to the control of the Swan River Colony and renamed Albany by Governor James Stirling.

During the late 19th and early 20th centuries, the town served as a gateway to the Eastern Goldfields and, for many years, it was the colony's only deep-water port, having a place of eminence on shipping services between Britain and its Australian colonies. The construction of Fremantle Harbour in 1893,  however, saw its importance as a port decline, after which the town's industries turned primarily to agriculture, timber and, later, whaling. Unlike Perth and Fremantle, Albany was a strong supporter of Federation in 1901.

Today the town is a place of significance as a tourist destination and base from which to explore the South-West of the State and is well regarded for its natural beauty and preservation of heritage. The town has an important, though somewhat controversial, role in the Anzac legend, being the last port of call for troopships departing Australia in the First World War.

Albany is the oldest permanently settled town in Western Australia, predating Perth and Fremantle by some two years.

Must See Places in Albany, Australia

The Albany region was first home to the Menang Noongar people, who made use of the area during the summer months for fishing and other activities. They called the area Kinjarling which means "the place of rain".  Many town names in South-Western Australia end in "up" or "ing", which means "place of" in the Noongar language. Early European explorers discovered evidence of fish traps located on Emu Point and on French, now Kalgan, River and a small "village" of bark dwellings that were, at the time, deserted.

The first European explorers to visit the area around Albany were on the Dutch ship Gulden Zeepaert (Golden Seahorse) skippered by François Thijssen in 1627.  They sailed along the south coast towards South Australia.

In 1791, English explorer George Vancouver explored the south coast including entering and naming King George Sound.  Albany was the site at which, on 27 September 1791, Vancouver took possession of New Holland for the British Crown.  Vancouver went out of his way to establish good relationships with the local Aboriginal people.

In 1792, Frenchman Bruni d'Entrecasteaux, in charge of the Recherche and L'Esperance, reached Cape Leeuwin on 5 December and explored eastward along the southern coast. The expedition did not enter King George Sound due to bad weather.

In 1801, Matthew Flinders entered King George Sound and stayed for about a month before charting the rest of the southern Australian coastline. By 1806 he had completed the first circumnavigation of Australia.

On 26 October 1826, Frenchman Dumont d'Urville in the L'Astrolabe visited King George Sound before sailing along the south coast to Port Jackson.

Later in 1826, on Christmas Day, a British Army expedition, led by Major Edmund Lockyer arrived on the Amity, from Sydney, and founded a military base.  Lockyer rescued Aboriginal women from offshore islands, who had been kidnapped by sealers operating in the Great Australian Bight as sexual slaves, and apprehended the culprits, sending them east to stand trial. As a result, the local Minang Noongar organised a corroboree in his honour, cementing the good relationships established earlier between local Aboriginal groups of the area and European explorers.

On 7 March 1831 the King George Sound and colony was made part of the Swan River Colony and a free settlement.

Albany was officially named by Governor Stirling at the beginning of 1832, at the time that political authority passed to the Swan River colony. It is named after Prince Frederick, Duke of York and Albany, and son of King George III.

Albany was also the final destination in 1841 of explorer Edward John Eyre, after being the first person to reach Western Australia by land from the East (Adelaide).

Until the opening of the Port of Fremantle in 1900,  Albany was also home to the only deep-water port in Western Australia, Princess Royal Harbour. This is the largest natural harbour in Western Australia and also on the entire south coast of the Australian mainland, outside of Melbourne. This facility meant that, for many years, the first port of call for the mail from England was at Albany. This put Albany in a privileged position over Perth and it remained that way until C. Y. O'Connor used dynamite on the reef that was blocking the entrance into the Swan River in Fremantle, thus establishing this port as Western Australia's major harbour.

Since that time, Albany has become popular with retirees, with inhabitants enjoying the fresh air, clean beaches, and fine views over the Southern Ocean It is still also a thriving regional centre.

Ships carrying the Australian Imperial Force and the New Zealand Expeditionary Force (later known collectively as ANZACs) to Europe to join World War I gathered at Albany in late October 1914. The first detachment departed in convoy on 1 November 1914, with a second detachment departing in late December 1914. Albany was the last place in Australia that the ANZACs saw and is therefore a prominent memorial, with the dedication of the Albany Anzac Peace Park and the pier of remembrance in 2010 a precursor to centenary commemorations planned for 2014-18.

There is a memorial to the Desert Mounted Corps on top of Mount Clarence. The memorial consists of a statue of an Australian mounted soldier assisting a New Zealand soldier whose horse has been wounded and a wall bearing the words "Lest We Forget". The first recorded Dawn Service was conducted by Anglican Chaplain Padre Arthur Earnest White (44th Battalion AIF) on 25 April 1923 atop Mount Clarence, and has been held ever since with several thousand people participating each year. Atop the adjoining Mount Adelaide is the Princess Royal Fortress - gun emplacements, buildings and a collection of military memorablilia to honour the sacrifice of Australian Defence Force personnel spanning the Boer War to today. The contribution of Mustafa Kemal Atatürk, president of Turkey from 1923 until 1938, is recognised by naming the entrance into Princess Royal Harbour as Atatürk Entrance, and there is a statue / monument overlooking the entrance on the Marine Drive walking trail. 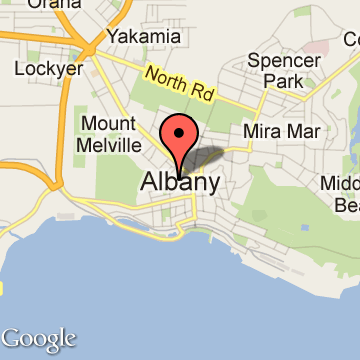