Inverness  is a city in the Scottish Highlands. It is the administrative centre for the Highland council area, and is regarded as the capital of the Highlands of Scotland. Inverness lies near two important battle sites: the 11th century battle of Blàr nam Fèinne against Norway which took place on The Aird and the 18th century Battle of Culloden which took place on Culloden Moor. It is the northernmost city in the United Kingdom and lies within the Great Glen (Gleann Mòr) at its north-eastern extremity where the River Ness enters the Moray Firth. At the latest, a settlement was established by the 6th century with the first royal charter being granted by Dabíd mac Maíl Choluim (King David I) in the 12th century. The Gaelic king, Mac Bethad mac Findláich (MacBeth) nicknamed An Rígh Dearg (The Red King) held a castle within the city where he ruled as Mormaer of Moray and Ross.

The population of Inverness grew rapidly between 2000 and 2010 at a rate of 14.1% with an estimated population of 59,000 in 2010, while the administrative area of Inverness, a larger area surrounding the city, has an estimated population of 74,265. Inverness is one of Europe's fastest growing cities, with a third of the Highland population living in or around the city and is ranked fifth out of 189 British cities for its quality of life, the highest of any Scottish city. In the recent past, Inverness has experienced rapid economic growth - between 1998 and 2008, Inverness and the rest of the Central Highlands showed the largest growth of average economic productivity per person in Scotland and the second greatest growth in the United Kingdom as a whole, with an increase of 86%. Inverness is twinned with one German city, Augsburg and two French towns, La Baule and Saint-Valery-en-Caux.

Inverness was one of the chief strongholds of the Picts, and in AD 565 was visited by St Columba with the intention of converting the Pictish king Brude, who is supposed to have resided in the vitrified fort on Craig Phadrig, on the western edge of the city. A 93 oz (2.6 kg) silver chain dating to 500–800 was found just to the south at Torvean in 1983. A church or a monk's cell is thought to have been established by early Celtic monks on St Michael's Mount, a mound close to the river, now the site of the Old High Church[16] and graveyard. The castle is said to have been built by Máel Coluim III (Malcolm III) of Scotland, after he had razed to the ground the castle in which Mac Bethad mac Findláich (Macbeth) had, according to much later tradition, murdered Máel Coluim's father Donnchad (Duncan I), and which stood on a hill around 1 km to the north-east.

The strategic location of Inverness has led to many conflicts in the area. Reputedly there was a battle in the early 11th century between King Malcolm and Thorfinn of Norway at Blar Nam Feinne, to the southwest of the city.

Inverness had four traditional fairs, including Legavrik or "Leth-Gheamradh", meaning midwinter, and Faoilleach. William the Lion (d. 1214) granted Inverness four charters, by one of which it was created a royal burgh. Of the Dominican friary founded by Alexander III in 1233, only one pillar and a worn knight's effigy survive in a secluded graveyard near the town centre.

Medieval Inverness suffered regular raids from the Western Isles, particularly by the MacDonald Lords of the Isles in the fifteenth century. In 1187 one Domhnall Bán (Donald Bane) led islanders in a battle at Torvean against men from Inverness Castle led by the governor's son, Donnchadh Mac An Toisich (Duncan Mackintosh). Both leaders were killed in the battle, Donald Bane is said to have been buried in a large cairn near the river, close to where the silver chain was found. Local tradition says that the citizens fought off the Clan MacDonald in 1340 at the Battle of Blairnacoi on Drumderfit Hill, north of Inverness across the Beauly Firth. On his way to the Battle of Harlaw in 1411, Donald of Islay harried the city, and sixteen years later James I held a parliament in the castle to which the northern chieftains were summoned, of whom three were executed for asserting an independent sovereignty.[citation needed] Clan Munro defeated Clan Mackintosh in 1454 at the Battle of Clachnaharry just west of the city. The Clan MacDonald and their allies stormed the castle during the Raid on Ross in 1491.

In 1562, during the progress undertaken to suppress Huntly's insurrection, Mary, Queen of Scots, was denied admittance into Inverness Castle by the governor, who belonged to the earl's faction, and whom she afterwards caused to be hanged. The Clan Munro and Clan Fraser took the castle for her. The house in which she lived meanwhile stood in Bridge Street until the 1970s, when it was demolished to make way for the second Bridge Street development.

Beyond the then northern limits of the town, Oliver Cromwell built a citadel capable of accommodating 1,000 men, but with the exception of a portion of the ramparts it was demolished at the Restoration. The only surviving modern remnant is a clock tower. In 1715 the Jacobites occupied the royal fortress as a barracks. In 1727 the government built the first Fort George here, but in 1746 it surrendered to the Jacobites and they blew it up.

Culloden Moor lies nearby, and was the site of the Battle of Culloden in 1746, which ended the Jacobite Rising of 1745–1746.

On 7 September 1921, the first UK Cabinet meeting to be held outside London took place in the Town House, when David Lloyd George, on holiday in Gairloch, called an emergency meeting to discuss the situation in Ireland. The Inverness Formula composed at this meeting was the basis of the Anglo-Irish Treaty. 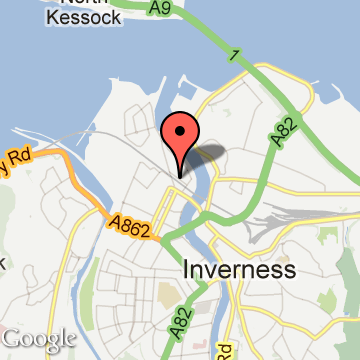