Dundee Listeni/dʌnˈdiː/ (Scottish Gaelic: Dùn Dè) is the fourth-largest city in Scotland and the 38th most populous settlement in the United Kingdom. It lies within the eastern central Lowlands on the north bank of the Firth of Tay, which feeds into the North Sea. Under the name of Dundee City, it forms one of the 32 council areas used for local government in Scotland.

The town developed into a burgh in Medieval times, and expanded rapidly in the 19th century largely due to the jute industry. This, along with its other major industries gave Dundee its epithet as the city of "jute, jam and journalism".

Today, Dundee is promoted as 'One City, Many Discoveries' in honour of Dundee's history of scientific activities and of the RRS Discovery, Robert Falcon Scott's Antarctic exploration vessel, which was built in Dundee and is now berthed in the city harbour. Biomedical and technological industries have arrived since the 1980s, and the city now accounts for 10% of the United Kingdom's digital-entertainment industry. Dundee has two universities—the University of Dundee and the University of Abertay Dundee. A £1,000,000,000 master plan to regenerate and to reconnect the Waterfront to the city centre which started in 2001 is expected to be completed within a 30 year period, with the Dundee Victoria & Albert Museum opening by 2015, at a cost of £45 million.

Dundee is also known for the Dandy, the Beano, Desperate Dan, Oor Wullie, and the three J's, jam, jute, and journalism, the stv news is known from Dundee. There is a new Victoria and Albert Museum to be built on waterfront near the Tay Bridge on a plot vacated by the soon-to-be-replaced public swimming baths. Visitors wishing to orientate themselves should consider taking a walk (or drive) up the Law, Dundee which offers a 360 degree uninterrupted view of Dundee, the Tay estuary and the two Tay Bridges.

The name "Dundee" is made up of two parts: the common Celtic place-name element dun, meaning fort; and a second part that may derive from a Celtic element, cognate with the Gaelic dè, meaning 'fire'.

While earlier evidence for human occupation is abundant, the source of Dundee's success and growth as a seaport town arguably came as a result of William the Lion's charter, granting Dundee to his younger brother, David (later Earl of Huntingdon) in the late 12th century. The situation of the town and its promotion by Earl David as a trading centre, led to a period of prosperity and growth. The earldom was passed down to David's descendants amongst whom was John Balliol, the town becoming a Royal Burgh on the coronation of John as king in 1292. The town and its castle were occupied by English forces for several years during the First War of Independence and recaptured by Robert the Bruce in early 1312. The original Burghal charters were lost during the occupation and subsequently renewed by Bruce in 1327.

The burgh suffered considerably during the conflict known as the Rough Wooing of 1543 to 1550, and was occupied by the English forces of Andrew Dudley from 1547. In 1548, unable to defend the town against an advancing Scottish force, Dudley ordered that the town be burnt to the ground. In 1645, during the Wars of the Three Kingdoms, Dundee was again besieged, this time by the Royalist Marquess of Montrose. The town was finally destroyed by Parliamentarian forces, led by George Monck in 1651. The town played a pivotal role in the establishment of the Jacobite cause when John Graham of Claverhouse, 1st Viscount Dundee raised the Stuart standard on the Dundee Law in 1689.

The economy of mediaeval Dundee centred on the export of raw wool, with the production of finished textiles being a reaction to recession in the 15th century. The introduction of two government acts in the mid eighteenth century had a profound effect on Dundee's industrial success. The textile industry was revolutionised by the introduction of large four-storey mills, stimulated in part by the 1742 Bounty Act which provided a government-funded subsidy on Osnaburg linen produced for export. Expansion of the whaling industry was triggered by the second Bounty Act, introduced in 1750 to increase Britain's maritime and naval skillbase. Dundee, and Scotland more generally, saw rapid population increase at end of the 18th and beginning of the 19th century, with the city's population increasing from 12,400 in 1751 to 30,500 in 1821.

The phasing out of the linen export bounty between 1825 and 1832 stimulated demand for cheaper textiles, particularly for the production of cheaper, tough fabrics. The discovery that the dry fibres of jute could be lubricated with whale oil (of which Dundee had a surfeit, following the opening of its gasworks) to allow it to be processed in mechanised mills resulted the Dundee mills rapidly converting from linen to jute, which sold at a quarter of the price of flax. Interruption of Prussian flax imports during the Crimean War and of cotton during the American Civil War resulted in a period of inflated prosperity for Dundee and the jute industry dominated Dundee throughout the latter half of the 19th century. Unprecedented immigration, notably of Irish workers, led to accelerated urban expansion, and at the height of the industry's success, Dundee supported 62 jute mills, employing some 50,000 workers.

The rise of the textile industries brought with it an expansion of supporting industries, notably of the whaling, maritime and shipbuilding industries, and extensive development of the waterfront area started in 1815 to cope with increased demand on port capacity. At its height, 200 ships per year were built there, including Robert Falcon Scott's Antarctic research vessel, the RRS Discovery. This ship is now on display at Discovery Point in the city. A significant whaling industry was also based in Dundee, largely existing to supply the jute mills with whale oil. Whaling ceased in 1912 and shipbuilding ceased in 1981.

While the city's economy was dominated by the Jute industry, it also became known for smaller industries. Most notable among these were James Keiller's and sons, established in 1795, which pioneered commercial marmalade production, and the publishing firm DC Thomson & Co., which was founded in the city in 1905 and remains the largest employer after the health and leisure industries. Dundee was said to be built on the 'three Js': Jute, Jam and Journalism.

The town was also the location of one of the worst rail disasters in British history, the Tay Bridge disaster. The first Tay rail bridge was opened in 1879. It collapsed less than a year later during a storm, as a passenger train passed over it, resulting in the loss of 75 lives. The most destructive fire in the city's history came in 1906, reportedly sending "rivers of burning whiskey" through the street.

The jute industry fell into decline in the early 20th century, partly due to reduced demand for jute products and partly due to an inability to compete with the emerging industry in Calcutta. This gave rise to unemployment levels far in excess of the national average, peaking in the inter-war period, but major recovery was seen in the post-war period, thanks to the arrival first of American light engineering companies like Timex and NCR, and subsequent expansion into microelectronics.

A £300 million master plan to regenerate Dundee Waterfront is expected to last for a 30 year period between 2001 and 2031. The aims of the project will be to reconnect the city centre to the waterfront; improve facilities for walking, cyclists and buses; replacing the existing inner ring road with a pair of east/west tree lined boulevards; a new civic square and a re-opened dock stretching from the Caird Hall and a regenerated railway station and arrival space at the western edge. 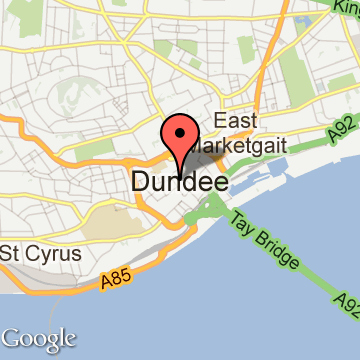