Kuala Lumpur is Southeast Asia’s youngest capital and one of the most economically successful after Singapore. A developing metropolis, Malaysia’s city centre is constantly experiencing rampant development and features a few insipid structures. Yet it manages to trump these architectural letdowns with ingenious urban wonders like the Petronas Twin Towers and Menara KL.

The marketing slogan for the Malaysian tourist board is ‘truly Asia’ and nowhere is this more true than in the capital. KL is every inch the Asian cyber-city: historic temples and mosques rub shoulders with space-age towers and shopping malls; traders’ stalls are piled high with pungent durians and counterfeit DVDs; and locals sip cappuccino in wi-fi–enabled coffee hops or feast at bustling streetside hawker stalls serving food from across the continent.

There’s a fair bit of greenery here, from the Lake Gardens and Taman Titiwangsa sanctuaries in the city centre to the wider expanses of Templar Park and the cool hill station of Genting Highlands, less than an hour away. A typical KL tour starts off at the colonial core around Merdeka Square and the Chinatown enclave followed by a trip to the warren of plank board passages of Chow Kit Market and the Muzium Negara in the south.

Kuala Lumpur has its origins in the 1850s, when the Malay Chief of Klang, Raja Abdullah, hired some Chinese labourers to open new and larger tin mines for tin prospectors. The miners landed at the confluence of Sungai Gombak (previously known as Sungai Lumpur, meaning "muddy river") and Sungai Klang (Klang River) to open mines at Ampang, Pudu and Batu. These mines developed into a trading post which became a frontier town.

The tin prospectors settled in Ampang, and formed gangs within themselves. The two largest Chinese gangsters, the Hakka-dominated Hai San and the Hokkien-dominated Ghee Hin, frequently engaged in warfare to gain control of tin production in the town. The incessant warfare between the two factions brought tin mine production to a standstill, prompting the British, who ruled Selangor as one of the Federated Malay States at the time, to appoint a Chinese Kapitan (headman) to administer Kuala Lumpur. Hiu Siew, the owner of a mine in Lukut, was elected as the first Kapitan. As one of the first traders to arrive in Ampang (along with Yap Ah Sze), he sold provisions to the miners in exchange for tin.

During the early times, Kuala Lumpur had many problems, including the Selangor Civil War; it was also plagued by diseases and constant fires and floods. Around the 1870s, the third Chinese Kapitan of Kuala Lumpur, Yap Ah Loy, emerged as leader, and became responsible for the survival and subsequent systematic growth of this town. He began to develop Kuala Lumpur from a small, obscure settlement into a booming mining town. In 1880, the state capital of Selangor was moved from Klang to the more strategically advantageous Kuala Lumpur 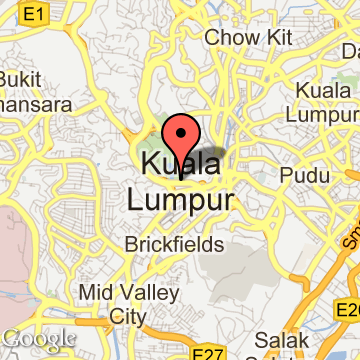