This is one of the most fantastic cities you ever have been to. A modern capital with a warm hospitality that you hardly find in many places around the world. Just around a corner you have long sandy beaches, paradise islands, virgin coral reefs, tropical rain forests; and the mighty Mount Kinabalu is only 90 minutes away.

Kota Kinabalu is situated on the tropical island of Borneo, and is the state capital of the Malaysian state Sabah, which is one of the two states of East Malysia. The location of the city is absolutely amazing; and from the airport it is just a short ride to mostly any hotel. You find a world class sailing marina and championship golf courses as well as both first class holiday resorts and good hotels for the budget traveler.

And the food is varied in a way that only a state with 30 ethnic groups can offer. The flavours you will find are excellent and in KK, as Kota Kinabalu also is called, there are gourmet meals in restaurants for elegant dining, but you will also find wonderful tastes and textures in a bowl in a hawker’s stall at the night market.

Kota Kinabalu is not only an instant resort city but also the perfect place for business, congresses and meetings. The business district is centrally located - with government, banks and commercial offices. And as a starting point for business in South-East Asia, this is a perfect place, there are direct flights to several main cities in this part of the world.

n the late 1800s, the British North Borneo Company (BNBC) began to establish colonies throughout North Borneo. In 1882 the Company founded a small settlement in the area known as Gaya Bay which was already inhabited by Bajau people. The first settlement was on Gaya Island. In 1897, this first settlement was burned and destroyed by the indigenous Bajau freedom fighter Mat Salleh.

After the destruction, the Company decided to relocate the settlement to a more easily defended mainland at Gantian Bay (now Sepanggar Bay) in 1898. However it was found to be unsuitable. In 1899, Mr. Henry Walker, a Land Commissioner identified a site of 30 acres (12 ha) with a width of six chains and length of about half a mile as replacement for Gantian. This fishing village named Api-Api (see Original names below) was chosen due to its proximity to North Borneo Railway and the natural port that was up to 24 feet deep and protected from the wind. This new administrative centre was renamed Jesselton after Sir Charles Jessel, the then Vice Chairman of the Company.

Eventually, Jesselton became a major trading post of North Borneo, dealing in rubber, rattan, honey, and wax. The new railway was used to transport goods to Jesselton harbour. The Malay and Bajau uprisings during these times were not uncommon, and the Company worked to quell the long-standing threat of piracy in the region.
Sir Charles Jessel, Vice Chairman of the BNBC after whom Jesselton (now Kota Kinabalu) was named.

Jesselton was razed by the retreating British early in World War II to prevent it from falling into the hands of the Japanese. After the Japanese takeover of Borneo, it was again renamed Api. Several rebellions against the Japanese military administration took place in Api. One major rebellion occurred in 10 October 1943 by the group called Kinabalu Guerrillas, consisting of local inhabitants. Japanese forces quelled the rebellion after its leader, Albert Kwok was arrested and executed in 1944.[8] At the later stages of the war, what remained of the town was destroyed again by Allied bombings day and night for over six months as part of the Borneo Campaign in 1945, leaving only three buildings standing. The war in North Borneo ended with the official surrender of the Japanese 37th Army by Lieutenant General Baba Masao in Labuan on September 10, 1945.

After the war on the edge of bankruptcy, the British North Borneo Company returned to administer Jesselton but was unable to finance the huge costs of reconstruction. They gave control of North Borneo to the British Crown on 15 July 1946. The new colonial government elected to rebuild Jesselton as the capital of North Borneo instead of Sandakan, which had also been destroyed by the war.[9]

When North Borneo together with Sarawak, Singapore & Federation of Malaya formed the Federation of Malaysia in 1963, the state became known as Sabah and Jesselton remained its capital. Jesselton was renamed Kota Kinabalu on September 30, 1968 and received official city status from the Malaysian government on February 2, 2000. 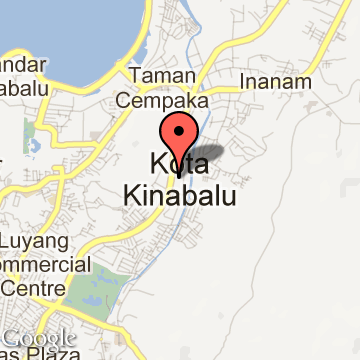