Emerald is a town located in the Central Highlands district of Central Queensland, Australia. At the 2006 census, Emerald had a population of 10,999.  The town is the business centre for the Central Highlands Regional Council.Emerald lies on the Nogoa River, a tributary of the Fitzroy River.  The town lies almost 300 kilometres from the coast and approximately 270 kilometres west of the city of Rockhampton on the junction of the Capricorn and Gregory highways. The Tropic of Capricorn intersects the Gregory Highway just north of Emerald.

Must See Places in Emerald, Australia

The area was first explored by the European Ludwig Leichhardt. Emerald was established in 1879 as a base for the Central Line from Rockhampton.Fairbairn Dam overflowed for the first time in 17 years on the 19 January 2008. Major flooding in Emerald occurred a few days after as the Nogoa River broke its banks. The floods, resulted in 1,000 houses being affected and more than 2,500 people being evacuated. The 2008 floods did not reach the heights of flooding in previous years.Some of the recorded floods have occurred in the region in 1863, 1864, 1868, 1870, 1871, 1872, 1875, 1876, 1878, 1882, 1887, 1890, 1894, 1896, 1898, 1906, 1912, 1918, 1920s, 1950 (where 1103.77 mm rain was recorded in Queensand), 1956 was the wettest year on record with 1032.29 mm rainfall. The 1970s also had similar rainfall to the 1860s and 1870s.Previous to the 1990s, flood damage to residential properties was almost non existent.The biggest impact from flooding of the Nogoa River in Emerald itself was that one side of Emerald was cut off from the other and caravans at the Carinya Caravan Park would be towed to higher ground each time the Nogoa River rose, to prevent the caravans from being completely submerged. This caravan park is now the site of the Centro Property where Coles Supermarket and other businesses trade from. The swamp area is now part of Kidd Street, a housing development, in which an old river course ran into. The creek that ran along the back of the hospital, past the rear of Woolworths and past the Information Centre has been filled in turned into a channel with a section cemented on one side near the information centre, reducing the channel in size by approx two thirds. This area has been allowed to be developed. This creek was renamed Creek Street for a short section. 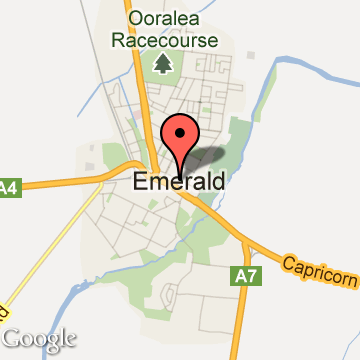