Public Holidays 9am to 2pm

Public holidays 9am to 1pm

Bundaberg has developed a rapidly expanding tourism industry and is now marketed as the Southern Gateway to the Great Barrier Reef. In season whale-watchers enjoy the majestic movements of these ocean giants, while backpacking tourists contribute greatly to the region's economy year round

Bundaberg has an abundance of attractive parks, gardens and sporting complexes - at last count 121. Salter Oval has a Sheffield Shield rated cricket pitch, and Kendall's Flat Junior Cricket complex is the largest and highest rated of its kind outside Brisbane. This is a city fascinated by sport and recreation, and the parks and gardens enable a great outdoor lifestyle.

Bundaberg boasts the most equable climate of any Australian town or city. In this capacity the city is ranked fifth in the world.

Bundaberg City Council, once responsible for local government administration in the Bundaberg area, amalgamated with the Shires of Burnett, Isis and Kolan in 2008 to form Bundaberg Regional Council.

Must See Places in Bundaberg, Australia

The local Aboriginal group is the Dundu:ra/Doondora people the inhabitants of the Hervey Bay (Dundu:ra Bay) region which stretched from the Mary River to the Burnett River who were part of the Wahr Language Group of the Kabi nation (Edward Curr 1886).

The first white man to visit the region was James Davis an escaped convict from the Moreton Bay Penal settlement in 1830. Davis was referred to as Durrumboi by the local Kabi people. (Rev Dunmore Lang 1861, William Ridley 1866). Another man named Alfred Dale Edwards was adopted into the Kalkie speaking clan Yongkonu (Thyeebalang Roth 1910, Archibald Meston 1892) and was given the moiety name Bunda which was part of the four class matrilineal (female descent) moiety system used by the Kabi people whose territory spread from the Caboolture river in the south to the Kolan river in the north. The Kabi moiety names were Balgoin, Barang, Bunda, Derwain and Tandor (Durrumboi in Ridley 1866), the phratry names were Kupaiathin and Dilbai. Gooreng (Gurang) and Wakka inland or wa'pa (slow speech) utilised the moiety name Banjurr in Balgoin's stead (Mathew 1910). Bunda was not a clan sub-tribe or tribe only one of the moiety names ( Dr T H May 1892 Brisbane Courier). Kabi headquarters is in Bundaberg (Kamarangan 2012). The boundary between the Wahr and Kalkie peoples of the Kabi tribe is the Burnett River. There was not a massacre on Paddy's Island in 1850 as the Island did not exist until after the 1870s as it was a sand bar in the Burnett or Birral- bara, belonging to god cited by Durrumboi in Dunmore Lang 1861 (Cooksland). The six dialects spoken were Nhulla, Cabbee, Kalkie, Wahr, Gubbi and Karbi (Batjala) as cited by Curr 1886 and Meston 1901. Durumboi referred to the Kabi as the Dippil people.

Queen Maria was the headman(Kamarangan 2012)of the Dilbai phratry over all Kabi people which is an inherited title (Mathew 1910). Maria stated that she was "Queen over all the bloomin land".

The descendents of Queen Maria of Childers still live in the Bundaberg region (Kamarangan 2012).

Bundaberg as a European township was founded by timbergetters Bob and George Stewart in 1867.  The first farmers in the area, including Thomas Watson, arrived soon after. It was local resident and District Surveyor John Charlton Thompson who received the directive to survey a plot an area on the South side of the river. The city was surveyed, laid out and named Bundaberg in 1870.  It was gazetted a town in 1902 and a city in 1913.

Timber was the first established industry in Bundaberg. In 1868 a sawmill was erected on the Burnett River downstream from the Steuart and Watson holdings.  The Burnett Sawmill operated for over 100 years at its East Bundaberg location. It was the oldest operating sawmill in the Bundaberg area until it ceased operating on 26 May 2010.

Experimental sugar cane growing in the district followed and a successful industry grew. The first sugar mill was opened in 1882.  The early sugar industry in Bundaberg was the result of the semi-slave labour carried out by Kanakas.The naming of Bundaberg's streets was a job for its surveyors, of which there were three. Thompson was assisted by unregistered surveyor assistants James Ellwood and Alfred Dale Edwards.  Edwards preferred using aboriginal names. Kolan, Woongarra, Barolin, Bingera, Kalkie, Moolboolooman, and for streets Tantitha, Bourbong etc. the later local Kalkie name for a large waterhole in front of the old Post Office Cairns Post 1910 P7 18 Jan W.A Dean. It is a common misconception that the main street was incorrectly gazetted in the Bundaberg Mail as "Bourbong" instead of "Bourbon" street and the name persisted. However, Rackemann conducted a survey of letterheads printed between 1904 and 1957.  Up until 1940 the count for both names was near enough to equal, with in some cases companies carrying both spelling variations in successive years. However, by 1941 there is no reference to "Bourbon" street. It is thought more likely that Edwards named it after 'Boorbong', the local name given to a series of waterholes near the Rubyanna area.  (Now East Bundaberg) This is borne out by farmer Robert Strathdee's farming selection in the vicinity of the watering holes being recorded on early survey maps as 'Boorbung'.  The Bourbong was referred to (Howitt 1904) as the name of one of the initiation ceremonies. Harry Aldridge stated that the scars of initiated men differed from that of Fraser Island in that men on Fraser Island had 5 vertical scars on their chest whereas in Bundaberg the Dundu:ra people had 3 scars across the chest. Edwards

In December 2010, Bundaberg experienced its worst floods in 60 years with floodwaters from the Burnett River inundating hundreds of homes. 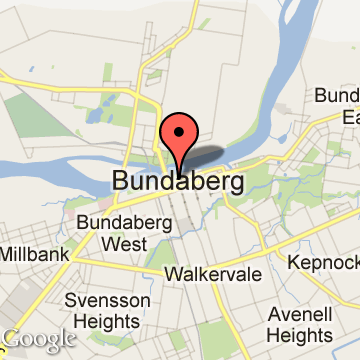