Maryborough was first settled in 1847 by Europeans and is one of Queensland's oldest cities. It was first settled as a wool port and served as the Fraser Coast immigration port in the early days of Australian settlement. It was second only to Sydney as an eastern seaboard port for free settlers. Maryborough, with its fine old Queenslander houses and heritage public buildings is situated on the banks of the Mary River and is now a dynamic regional hub. The area has become a popular retirement haven and is something of a living museum with its remnants of opium dens and Wharf Street district heritage. The city's connection with the port is maintained by a small craft marina and slipways for larger craft building and repairs. The Silver Eagle arrived in May 1880 carrying 264 immigrants from England. The immigrants finally stepped on to dry land after a three month voyage battling strong gales during the trip. (See photo)
The selection of the current inner City area as the site for the permanent town and port was a result of surveyor Hugh Labatt's survey of 1849-50. The relocation of most of the 350 settlers of the original township occurred by the mid 1850's. The rapid growth of the new port and the town was stimulated by the timber, sugar, tallow, wool and hide industries. Trade and commerce were later consolidated with the Gympie gold rush.

Must See Places in Maryborough, Australia

Maryborough was founded in 1847, was proclaimed a municipality in 1861, and became a city in 1905. During the second half of the 1800s, the city was a major port of entry to immigrants arriving in Queensland from all parts of the world. The name was derived from the Mary River which was named in 1847 after Lady Mary Lennox (1790–1847) the wife of Sir Charles Augustus Fitzroy, then Governor of the colony of New South Wales. Lady Mary was killed in a coach accident very soon after, devastating Sir Charles.Australia's only outbreak of pneumonic plague occurred in Maryborough in 1905. At the time Maryborough was Queensland's largest port — a reception centre for wool, meat, timber and other rural products. A freighter from Hong Kong, where plague was rampant, was in the port of Maryborough about the time that a wharf worker named Richard O'Connell took home some sacking from the wharf, for his children to sleep on. Subsequently, five of the seven O'Connell children, two nurses, and a neighbour died from the disease. Fortunately, there were no more cases but the ensuing fear, panic, and hysteria totally consumed the town, and a huge crowd gathered to witness the family’s house being burnt to the ground by Health officials. A memorial fountain was built in the grounds of the City Hall and dedicated to the nurses. 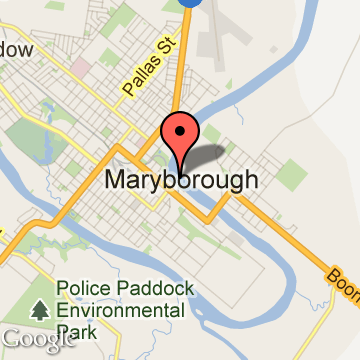