Newry is a city in Northern Ireland. The River Clanrye, which runs through the city, forms the historic border between County Armagh and County Down. It is 34 miles (55 km) from Belfast and 67 miles (108 km) from Dublin. Newry (together with Bessbrook) had a population of 27,433 at the 2001 Census, while Newry and Mourne Council Area had a population of 87,058. Newry was founded in 1144 alongside a Cistercian monastery and is one of Northern Ireland's oldest towns.

The city of Newry is one of the constituent cities of the Dublin-Belfast corridor and sits at the entry to the "Gap of the North", close to the border with the Republic of Ireland. It grew as a market town and a garrison and became a port in 1742 when it was linked to Lough Neagh by the first summit-level canal in Britain or Ireland. In March 2002, as part of Queen Elizabeth's Golden Jubilee celebrations, Newry was granted city status alongside Lisburn. Despite being the fourth largest city in Northern Ireland, however, it is not the fourth largest settlement. Newry has long been an important centre of trade because of its position between Belfast and Dublin.

The small medieval town was enlarged in 1142 with the rebuilding of an older Patrician monastery, and there is strong evidence of continual human habitation in the area from 6th century. The town was granted its first charter in 1157 by then High King of Ireland Muirchertach Mac Lochlainn. The first monastery only lasted until 1162, when it was burned to the ground; however, it was not completely destroyed, and it was later restored to some degree and enlarged by a Cistercian monastery. This monastery itself was later converted to a collegiate church in 1543, before being surrendered to the crown in 1548.

In 1550 an English mercenary, Nicholas Bagenal, fled to Ireland after being involved in a murder in Yorkshire. After some time he reached a high status, was granted a pardon, and became Marshall of the army. He secured a 21 year lease on the property confiscated from the Cistercians. It is suggested that he later built a castle in Newry, but no documentaty evidence has been found. Some books record his restoration of Newry Castle. The castle was first built by De Courcey at the top of Mill Street in 1198, and typical of the period and of De Courcey, was built within the Abbey grounds. It can be seen on an early English Map fronting the Northern gate of the Abbey. Remains of the original Cistercian monastery still stand and walls can be seen around the outskirts of the city, some as far away as Saval, to where the Abbey extended.

Newspaper reports have suggested that Bagenal used the Abbot's House as his castle and so it would seem that the location of the house is the key to this story. A building supposedly discovered quite recently was claimed to be the Abbot's House. This claim was quickly repudiated by a local historian Oliver Curran, however. According to a map of a typical Cistercian abbey the Abbot's House can be found elsewhere. The claim building in question, however, was transformed into the supposed Bagenal Castle, is apparently based on pure speculation. Many structures of the abbey can still be seen today; many of the old walls are still standing and a small medieval church can be found in the grounds of the nearby convent which was once part of the abbey. Mention of the convent can be seen in the Bagenal papers. The site was said to consist of a 'church, steeple, and cemetery, chapter-house, dormitory and hall, two orchards and one garden, containing one acre, within the precincts of the college'.] It should be suffice to say that the remains of the Blessed Virgin Church of Newry can be found today on Castle Street, near to the LIDL store, which was built above its undercrofts. The building was last used as Mc Canns bakery, which was first opened as a bakery in 1896. It must be remembered, however, that when McCanns first opened a bakery in Newry it was not in this church building, but one across the street, which is more commonly known as the Coal Hole or the Bucket, and it stood at the top of Hyde Market. Mc Canns first started the bakery here in 1836 and move to the Church in 1896. It is interesting to note that Harris mentioned seeing the church remains at the top of Hyde Market in his 1740, Ancient and Present history of Down. It is also interesting to note that this 1740 date of the Harris publication is just 20 years after the Bagenal dynasty ended in Newry, and yet Harris gives no indication or mention of a Bagenal Castle, what he saw at this date in time was a church, and yet he does mention all other Castles in the County of Down.

A rental roll, dated 1575, provides a unique insight into life in the town at the time. It listed the names of the tenants in 'the High Street', 'tenements within the Fort' and the Irish Street without the Fort'.[citation needed] These three distinct areas also appear in a map of the same time, along with a fake drawing of the castle.[citation needed]

During the Williamite War, the forces of King James II set fire to the town in 1689, while retreating from William.[citation needed]

The town was rebuilt shortly afterwards, and its fortunes changed dramatically. A further period of economic prosperity, evidence of which can be seen in the many fine buildings and public places that can still be seen today.

By 1881 the population of Newry had reached 15,590.
Newry Urban District Council was unusual in that during the period from the 1920s to the 1960s it was one of only a handful of councils in Northern Ireland which had a majority of councillors from the Catholic/Nationalist community. (The others were Strabane UDC and a handful of rural district councils.) The reason according to Michael Farrell was that this community formed such a large majority in the town, around 80% of the population, that it was impossible to gerrymander. Also an oddity was that for a time it was controlled by the Irish Labour Party, after the left wing of the Northern Ireland Labour Party defected to them in the 1940s 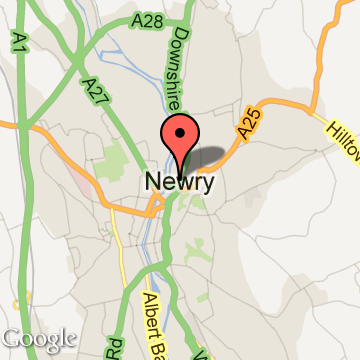