Derry or Londonderry is the second-largest city in Northern Ireland and the fourth-largest city on the island of Ireland. The name Derry is an anglicisation of the Irish name Daire or Doire meaning "oak grove". In 1613, the city was granted a Royal Charter by King James I and the "London" prefix was added, changing the name of the city to Londonderry. While the city is more usually known as Derry, Londonderry is also used and remains the legal name.

The old walled city lies on the west bank of the River Foyle, which is spanned by two road bridges and one footbridge. The city now covers both banks (Cityside on the west and Waterside on the east). The city district also extends to rural areas to the southeast. The population of the city proper (the area defined by its 17th-century charter) was 83,652 in the 2012 Census, while the Derry Urban Area had a population of 105,066.  The district is administered by Derry City Council and contains both Londonderry Port and City of Derry Airport.

The Greater Derry area, that area within about 20 miles (32 km) of the city, has a population of 237,000. This comprises the districts of Derry City and parts of Limavady district, Strabane district, and East Donegal (including Raphoe and St Johnston), along with Inishowen.

Derry is close to the border with County Donegal, with which it has had a close link for many centuries. The person traditionally seen as the 'founder' of the original Derry is Saint Colmcille, a holy man from Tír Chonaill, the old name for almost all of modern County Donegal (of which the west bank of the Foyle was a part before c. 1600). Derry and the nearby town of Letterkenny form the major economic core of north west Ireland.

In 2013, Derry will become the inaugural city to be designated UK City of Culture, having been awarded the title in July 2010.

Derry is one of the oldest continuously inhabited places in Ireland. The earliest historical references date to the 6th century when a monastery was founded there by St Columba or Colmcille, a famous saint from what is now County Donegal, but for thousands of years before that people had been living in the vicinity.

Before leaving Ireland to spread Christianity elsewhere, Columba founded a monastery in the then Doire Calgach, on the east side of the river Foyle. According to oral and documented history, the site was granted to Columba by a local king. The monastery then remained in the hands of the federation of Columban churches who regarded Colmcille as their spiritual mentor. The year 546 is often referred to as the date that the original settlement was founded. However it is now accepted by historians that this was an erroneous date assigned by medieval chroniclers. It is accepted that between the 6th century and the 11th century, Derry was known primarily as a monastic settlement.
The town became strategically more significant during the Tudor conquest of Ireland and came under frequent attack, until in 1608 it was destroyed by Cahir O'Doherty, Irish chieftain of Inishowen 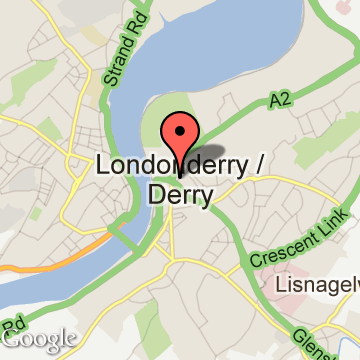