Newport (Welsh: Casnewydd) is a city and unitary authority in south east Wales. It is located on the River Usk close to its confluence with the Severn estuary, 12 miles (19 km) east of Cardiff. It is the third largest city in Wales, with a population of 145,700 (2011 census).

Newport has been a port since medieval times, when a castle was built by the Normans. The town outgrew the earlier Roman town of Caerleon, immediately upstream, and gained its first charter in 1314. It grew significantly in the 19th century, when its port became the focus of coal exports from the eastern valleys of South Wales. Until the rise of Cardiff from the 1850s, Newport was Wales' largest coal-exporting port. It was the site of the last large-scale armed insurrection in Britain, the Newport Rising of 1839 led by the Chartists.

During the 20th century, the docks declined in importance, but Newport remained an important manufacturing and engineering centre. It was granted city status in 2002. It is the home of the University of Wales, Newport, and the Newport Gwent Dragons rugby union regional team, and hosted the Ryder Cup in 2010.

It is the largest urban area within the historic county boundaries of Monmouthshire and the preserved county of Gwent. The City of Newport, which includes some surrounding rural areas as well as the built up area, is governed by Newport City Council.

Bronze Age fishermen settled around the fertile estuary of the River Usk and later the Celtic Silures built hillforts overlooking it. In AD 75, on the very edge of their empire, the Roman legions built a Roman fort at Caerleon to defend the river crossing. According to legend, in the late 5th century Saint Woolos church was founded by Saint Gwynllyw, the patron saint of Newport and King of Gwynllwg. The church was certainly in existence by the 9th century and today has become Newport Cathedral, the seat of the Bishop of Monmouth. The Normans arrived from around 1088–1093 to build Newport Castle and river crossing downstream and the first Norman Lord of Newport was Robert Fitzhamon.

Newport railway station underwent a £22 million refurbishment programme, completed in time for the Ryder Cup in October 2010. The project introduced a futuristic new passenger terminal and bridge, whilst restoring the 19th-century features of the site. The new complex, west of the old station entrance, includes two terminals, new terminal buildings and a public footbridge, a new passenger footbridge, a new taxi area and short-stay car park, and a 250-space passenger car park.

The settlement of 'Newport' is first mentioned as novo burgus established by Robert, Earl of Gloucester in 1126. The name was derived from the original Latin name Novus Burgus, meaning new borough or new town. The city can sometimes be found labelled as Newport-on-Usk on old maps. The original Welsh language name for the city, Casnewydd-ar-Wysg (pronounced [kasˈnɛwɪð ar ˈwɪsk]) means 'New castle-on-Usk' (this is a shortened version of Castell Newydd ar Wysg) and this refers to the twelfth-century castle ruins near Newport city centre. The original Newport Castle was a small Motte-and-bailey castle in the park opposite Newport Cathedral. It was buried in rubble excavated from the Hillfield railway tunnels that were dug under Stow Hill in the 1840s and no part of it is currently visible.

Around the settlement, the new town grew to become Newport, obtaining its first charter in 1314  and was granted a second one, by Hugh Stafford, 2nd Earl of Stafford in 1385. In the 14th century friars came to Newport where they built an isolation hospital for infectious diseases. After its closure the hospital lived on in the place name "Spitty Fields" (a corruption of ysbyty, the Welsh for hospital). "Austin Friars" also remains a street name in the city.

During the Welsh Revolt in 1402 Rhys Gethin, General for Owain Glyndŵr, forcibly took Newport Castle together with those at Cardiff, Llandaff, Abergavenny, Caerphilly, Caerleon and Usk. During the raid the town of Newport was badly burned and Saint Woolos church destroyed.

A third charter, establishing the right of the town to run its own market and commerce came from Humphrey Stafford, 1st Duke of Buckingham in 1426. By 1521 Newport was described as having "....a good haven coming into it, well occupied with small crays [merchant ships] where a very great ship may resort and have good harbour." Trade was thriving with the nearby ports of Bristol and Bridgwater and industries included leather tanning, soap making and starch making. The town's craftsmen included bakers, butchers, brewers, carpenters and blacksmiths. A further charter was granted by James I in 1623.

During the English Civil War in 1648 Oliver Cromwell's troops camped overnight on Christchurch Hill overlooking the town before their attack on the castle the next day. A cannon-ball dug up from a garden in nearby Summerhill Avenue, dating from this time, now rests in Newport Museum. 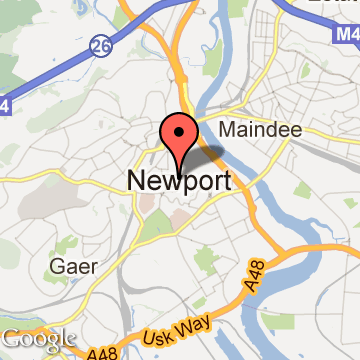