Anand is known as the Milk Capital of India. It became famous for Amul dairy and its milk revolution. This city hosts the National Dairy Development Board of India and Anand Agricultural University. Another well-known product of the city is Vallabh Vidhyanagar and Karamsad, an educational suburb of Anand.

Anand has seen rapid economic growth along the Anand Vallabh Vidya Nagar and Karamsad road belt. It is well on track to becoming a Municipal Corporation with the inclusion of various peripheral villages like Karamsad, Chikhodra, Lambhvel, V. V Nagar, Bakrol, Mogri and 20 others.

Must See Places in Anand, India

The British rule came to an end on 15/8/1947 and India became independent. The new government integrated the royal states into the state of Bombay. Kheda district came into existence on 1/8/1949. Thereafter, some changes were made in the villages of certain talukas and villages were identified for different talukas of the district from 15/10/1950. The district of Kheda consists of Khambhat, Petalad, Borsad, Anand, Nadiad, Matar, Mahemdavad, Kapadvanj, Thasara and Balashinor talukas. State Govt. has formed six new districts from 1/10/97 and Anand has been carved out as a separate district from Kheda. The district of Anand comprises 8 talukas i.e. Umareth, Petalad, Sojitra, Borsad, Anklav, Khambhat and Tarapur.

Anand is also popularly known as Charotar. Some of the villages of Borsad, Petalad and Anand talukas are located in this region. Known as "Golden Leaf", this region of charotar has the highest production of tobacco in Gujarat. In Gujarati, the world "Charutar" literally means a pot full of gold coins. The entire region is very fertile and productive.

Some of the villages of Khambhat and Tarapur talukas fall within the "Bhal" region. 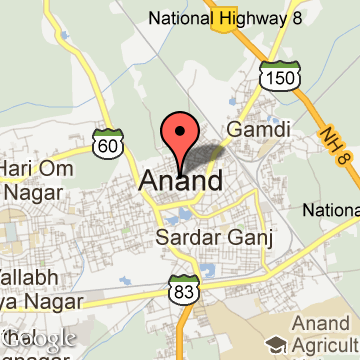