Mount Barker is an expanding city, home to 10 258 residents that is 33 kilometres up the South Eastern Freeway, east of Adelaide, in South Australia. It is the seat of the District Council of Mount Barker, is the largest town in the Adelaide Hills, and is one of the fastest growing areas in the state. Mount Barker is close enough to Adelaide that many people commute there on a daily basis, although it is far enough away from the city that people call it "the country".Mount Barker lies at the base of a local mountain of the same name, called the Mount Barker summit by locals. It is 50 kilometres from the Murray River. Mount Barker was traditionally a farming area, and many of the lots just outside the town area are farming lots, although some of them have been replaced with new subdivisions in recent times.The Mount Barker Summit was first discovered by Captain Collet Barker in 1830, but he was killed by Aborigines in 1831, so Captain Charles Sturt named Mount Barker after him when he founded it in 1834.
Mount Barker is well serviced, with a recently upgraded Police station, a Country Fire Service station, the Adelaide Hills State Emergency Service centre, an Ambulance station, and five bus routes.Mount Barker is in the federal division of Mayo, and the state electoral districts of Kavel and Heysen, with most of the town in Kavel, and only the south-eastern portion of the town in Heysen. Local Federal Member of Parliament, Jamie Briggs, succeeded former Foreign Affairs Minister, Alexander Downer.Mount Barker was the epicenter for an Earthquake on 16 April 2010 at 11.35pm local time, the quake registered 3.8 on the Richter scale.

Mount Barker, the mountain, was first sighted by Captain Charles Sturt in 1830, although he thought he was looking at the previously discovered Mount Lofty. Captain Collet Barker corrected this error when he surveyed the area in 1831. Sturt named the mountain in honour of Captain Barker after he was killed later that year by Aborigines, at the Murray Mouth.  The mountain was officially recognised by King William IV in 1834, two years before the colonisation of South Australia in 1836.  The mountain was first climbed in December 1837 by the explorers Robert Cock, William Finlayson, A. Wyatt and G. Barton, when they passed through the area on their expedition from Adelaide to Lake Alexandrina,   although a claim by John Barton Hack that his party of Stuart, John Morphett, bushman Tom Davies and "a gentleman from Hobart Town" were, in 1837, the first white men to climb the hill,  is credible.Mount Barker was originally home to the Peramangk Aboriginal people. The Ngarrindjeri people from the east also used the Summit for ceremonial and burial sites. The Mount Barker Summit is a significant Aboriginal area, and may be one of the most sacred sites near Adelaide.  In 1984 the Ngarrindjeri people tried to prevent the building of a police communications tower, and in 1987 they also tried to stop the Telecom tower, although both attempts were not successful. 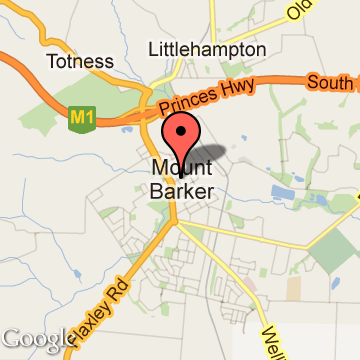