Nakhon Pathom is a rather small city. You can easily get around to the main sights (both of them) on foot, which is just as well since there's little in the way of public transportation.

The city's main attraction, the Phra Pathom Chedi, is litterally right in front of you as you step off the train. It's just a short walk from the train station to the chedi. Most buses park along the canal which runs between the Buddhist monument and the train station.

The city's other main sight is Sanam Chan Palace, due west of the chedi.

Nakhon Pathom is a typical provincial Thai city, with Phra Pathom Chedi as a visible link to Nakhon Pathom’s claim as the country’s oldest city. The town also proudly wears its first-born status within its name, which derives from the Pali ‘Nagara Pathama’ meaning ‘First City’. At one time Nakhon Pathom functioned as the centre of the Dvaravati kingdom, a loose collection of Mon city states that flourished between the 6th and 11th centuries AD in Mae Nam Chao Phraya valley. Some historians speculate that the area may have been inhabited before India’s Asokan period (3rd century BC), as there is a theory that Buddhist missionaries from India visited Nakhon Pathom at that time.

Although the town is quite sleepy, it is an easy destination to see everyday Thai ways and practise your newly acquired language skills on a community genuinely appreciative of such efforts. 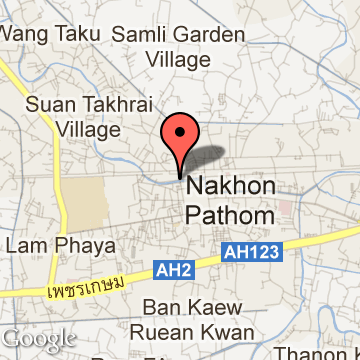