Hastinapur is a very important place,both for Jains and Hindus.Its a pilgrimage for all. The Hindu mythology related to this place is known to all...Thanks to Mr.B.R.Chopra....but the Jainism importance is known to few so I will concentrate on that. Hastinapura was the capital of the kingdom of the Kauravas, belonging to the Kuru dynasty of kings. The throne of this city was the prize over which the Kurukshetra War of the epic Mahabharata was fought. All incidents in the epic Mahabharata have taken place in this city of Hastinapura. The first reference to Hastinapur in Hindu mythology comes as the capital of Emperor Bharata. Now regarding Jainism,It is considered to be the Kashi of Jain Religion.

Must See Places in Hastinapur, India

Hastinapur was the capital of the Kuru dynasty of kings.There are many ancient buildings that are situated in Hastinapur. All incidents in the epic Mahabharata were believed to have taken place in the city of Hastinapur. The first reference to Hastinapur in Puranas comes as the capital of Emperor Bharata. Samrat Samprati, the grandson of the emperor Asoka, built many temples here during his empire. The ancient temple and stupas are not present today. Excavation at Hastinapur was carried out in the early 1950s by B.B. Lal, Director General of the Archaeological Survey of India. Although the main aim of this excavation, mentioned by Lal himself, was to find out the stratigraphic position of Painted Grey Ware with reference to other known ceramic industries of the early historical period, Lal could not resist attempting a correlation between the text of the Mahabharata and the material remains that he uncovered at Hastinapur.

A beautiful gurudwara is located in the village of Saifpur. The village is around 2.5 km from the town and is one of the most popular sites in the area. There are many other places of interest that one can visit in the town of Hastinapur. 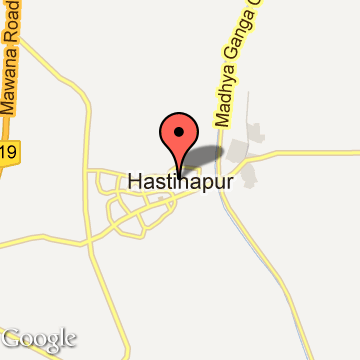