Alice Springs is the third largest town in the Northern Territory, Australia. Popularly known as "the Alice" or simply "Alice", Alice Springs is situated in the geographic centre of Australia near the southern border of the Northern Territory.  The site is known as Mparntwe to its original inhabitants, the Arrernte, who have lived in the Central Australian desert in and around what is now Alice Springs for thousands of years. Alice Springs has a population of 25,186 people, which makes up 12 percent of the territory's population.  Alice averages 576 metres (1,890 ft) above sea level; the town is nearly equidistant from Adelaide, South Australia and Darwin.

The Arrernte Aboriginal people  have made their home in the Central Australian desert in and around the site of the future Alice Springs for thousands of years, with evidence suggesting Indigenous occupation of the region dating back at least 30,000 years.  The Aboriginal name for Alice Springs is Mparntwe.  Many Arrernte people also live in communities outside of Alice Springs and on outstations.

Three major groups: the Western, Eastern and Central Arrernte people live in Central Australia, their traditional land including the area of Alice Springs and MacDonnell Ranges. They are also referred to as Aranda, Arrarnta, Arunta, and other similar spellings. Their neighbours are the Southern Arrernte, Luritja, Anmatyerr, Alyawarr and Western Arrernte peoples. There are five dialects of the Arrernte language: South-eastern, Central, Northern, Eastern and North-eastern.

There are roughly 1,800 speakers of Eastern and Central Arrernte, making it the largest spoken language in the Arandic family. This is one of the largest populations to speak any Australian language. It is taught in schools, and heard in local media and local government.

Arrernte country is rich with mountain ranges, waterholes, and gorges, which create a variety of natural habitats. The Arrernte people have set aside conservation areas in which various animal and other species are protected. According to the Arrernte traditional stories, in the desert surrounding Alice Springs, the landscape was shaped by caterpillars, wild dogs, travelling boys, two sisters, euros, and other ancestral figures. The numerous sites of traditional importance in and around Alice Springs include Anthwerrke (Emily Gap), Akeyulerre (Billy Goat Hill), Ntaripe (Heavitree Gap), Atnelkentyarliweke (Anzac Hill), and Alhekulyele (Mt Gillen).

In 1861–62, John McDouall Stuart led an expedition through Central Australia, to the west of what later became Alice Springs, thereby establishing a route from the south of the continent to the north.

A European settlement was started ten years later with the construction of a repeater station on the Overland Telegraph Line, which linked Adelaide to Darwin and Great Britain. The OTL was completed in 1872. It traced Stuart's route and opened up the interior for permanent settlement.The telegraph station was sited near what was thought to be a permanent waterhole in the normally dry Todd River.  The settlement was optimistically named Alice Springs after the wife of the former Postmaster General of South Australia, Sir Charles Todd. The Todd River was named after Sir Charles.

It was not until alluvial gold was discovered at Arltunga, 100 kilometres (62 mi) east of the present Alice Springs, in 1887 that any significant European settlement occurred.  The town's first substantial building was the Stuart Town Gaol in Parson's street which was built in 1909 when the town had a European population of less than 20 people. Many of the gaol's first prisoners were first contact aboriginal men incarcerated for killing cattle.  Central Australia's first hospital, Adelaide House, was built in 1926 when the European population of the town was about 40. It was not until 1929 when the train line to Alice was built, that the town's European population began to grow. Aboriginal centralians outnumbered European Centralians until the mid 1930s.  Until 31 August 1933, the town was officially known as Stuart.

The original mode of British-Australian transportation in the outback were camel trains, operated by immigrants from Pathan tribes in the North-West frontier of then British India (present-day Pakistan); known locally as Afghan camellers based at Hergott Springs, or Marree as it is now known. Many camelleers moved to Alice Springs in 1929 when the railway finally reached the town. They lived on the block where the town council now is transporting goods from the rail head to stations and settlements to the north. A gold rush in Tennant Creek in 1932 kept the wheels of the Alice Springs economy flourishing until the outbreak of World War II.

Alice Springs was connected to Darwin by rail on 4 February 2004, the first passenger train arrived in Darwin from Adelaide.

World War II brought significant changes to Alice Springs. Prior to the war, Alice Springs was an extremely isolated settlement of fewer than 500 people. During the war, however, the town was an extremely active staging base, known as No. 9 Australian Staging Camp, and a depot base for the long four-day trip to Darwin. The railway hub in Alice Springs was taken over by military operations and the number of soldiers posted in Alice Springs grew rapidly, as did the number of personnel passing through on their way to and from Darwin. When Darwin was threatened by Japanese forces, the sea routes—the Northern Territory capital's primary means of transportation and resupply—were cut off. The evacuation of Darwin first brought a large number of civilians including elected officials and many of the territory government's records. Alice Springs became the war-time civilian capital of the Northern Territory. When Darwin was bombed by Japanese air forces, a large number of military personnel and their heavy equipment were rapidly moved south to Alice Springs. The number of soldiers posted in Alice Springs peaked at around 8,000 and the number of personnel passing through totaled close to 200,000.  Once the war ended, the military camps and the evacuees departed and Alice Springs' population declined rapidly. But Alice would be changed for ever. After being visited by nearly 200,000 people, including the American General Douglas MacArthur, Alice Springs gained considerable fame. The war years also left behind many beneficial material assets. The historically-listed Totem Theatre, created for the entertainment of this camp, still exists today. The Australian Army set up the 109th Australian General Hospital at Alice Springs. Seven mile aerodrome was constructed by the Royal Australian Air Force. War related operations necessitated the first sealing of the road between Alice Springs and Larrimah, expansion and improvement of Alice Springs' water supply, and improving the rail head. The war-related operations left behind thousands of pieces of excess military equipment and vehicles, and a marked increase in Alice Springs' population.

During the 1960s Alice Springs became an important defence location with the development of the US/Australian Pine Gap joint defence satellite monitoring base, home to about 700 workers from both countries.

The modern town of Alice Springs has both European and Aboriginal influences. The town's focal point, the Todd Mall, hosts a number of Aboriginal art galleries and community events. Alice Springs’ desert lifestyle has inspired several unique events, such as the Camel Cup, the Henley-on-Todd Regatta and the Beanie Festival.

Alice Springs has many historic buildings including the Overland Telegraph Station, the Old Courthouse and Residency and the Hartley Street School. Adelaide House,a beautiful stone building in the middle of the Mall, Central Australia's first hospital, was designed and built by the Rev John Flynn, founder of the world's first flying doctor service, in 1926. It was also the site of the world's first successful portable wireless radio experiment conducted by Alf Traeger. Today it is a museum, one of several significant tourist attractions which forms part of 'The Flynn Trail' a self-guided urban heritage trail.

Today the town is an important tourist hub and service centre for the surrounding area. It is a well-appointed town for its size, with several large hotels, a world class convention centre and a good range of visitor attractions, restaurants and other services. 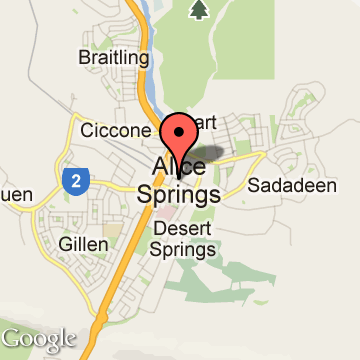