Nathdwara is a town in Rajasthan state of western India. It is located in the Aravalli hills, on the banks of the Banas River in Rajsamand District, 48 kilometres north-east of Udaipur. This town is famous for its temple of Krishna which houses the idol of Shrinathji, a 14th-century, 7-year-old "infant" incarnation of Krishna. The idol was originally worshipped at Mathura and was shifted in the 1672 from Govardhan hill, near Mathura along holy river Yamuna after being retained at Agra for almost six months, in order to protect it from anti-Hindu fanatic iconoclastic Islamic policies of Mughal ruler Aurangzeb’s. Literally, Nathdwara means ‘Gateway to Shrinathji’. Nathdwara is a significant Vaishnavite shrine pertaining to the Pushti Marg or the Vallabh Sampradaya or the Shuddha Advaita founded by Vallabha Acharya, revered mainly by people of Gujarat and Rajasthan, among others. Vitthal Nathji, son of Vallabhacharya institutionalised the worship of Shrinathji at Nathdwara. Nathdwara town itself is popularly referred to as ‘Shrinathji’, after the presiding deity.

Nathdwara town is located in idyllic environment with river Banas on the west and north and Aravali Mountain girdling it on all other sides. The town is situated on NH-8. Nathdwara is famous for the temple of Shrinathji which is devout place for Hindu’s especially for Vyshnava’s. Nathdwara is also famous for Pichhwai paintings (Large paintings on cloth with Lord Krishna and Gopikas). These paintings are recognized for opulent use of pure gold color. The town also is applauded for Haweli music (devotional music).

‘Holi and Shri Krishna Janmashtami’ are major festivals at Nathdwara. At the time of Holi, Janmashtmi, and Diwali people gather in huge numbers in the main streets of town to celebrate festivals. ‘Annakutta’ (allied to Lord Krishna lifting Govardhana Giri) is a very special festival that is celebrated with great enthusiasm and excitement. Despite being a small town Nathdwara has a beating township around the temple.

Must See Places in Nathdwara, India

According to legend, Shrinathji’s idol was brought to Rajasthan from Govardhan near Vrindavan in order to protect it from the cruel hands of Mughal emperor Aurangzeb. Aurangzeb during his reign in 1665 was bent on destroying each and every Hindu shrine and temple in Vrindavan and in its vicinity and to protect the idol of Shrinathji it was decided that it should be moved from Vrindavan to other safe place. So the King of Mewar, Maharana Rajsingh volunteered to take it to Mewar with him. However, Lord Krishna had other plans and on the way to Mewar, wheels of the cart, which was carrying the idol, got stuck in the mud and Maharana Rajsingh got the hint that Shrinathji has chosen his abode. Hence, he constructed the temple at Nathdwara and placed the idol there. Since then Nathdwara has become popular for this 17th century temple of Lord Krishna in his young avatar. 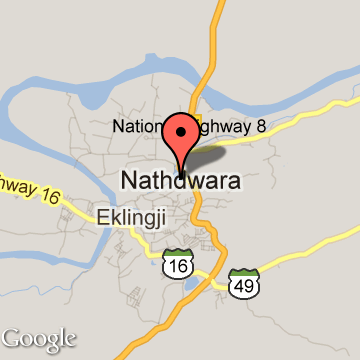