Also known by its Hindi name, Uttar Dinajpur, North Dinajpur is an interesting place to visit and houses places of historical and religious significance. It is also home to various rare birds and animals.North Dinajpur located in the state of West Bengal is one of the well known districts of the state. It is enclosed by Panchagarh district in Bangladesh on the east, Purnia district of Bihar on the west, Darjeeling district on the north and Malda district on the south.

North Dinajpur travel guide is full of reference to the mesmerizing sceneries and serene spots. Some of the popular places of North Dinajpur include Dargah of Shah Ata, Goddess Kali Temple, Raiganj Bird Sanctuary and Sap Nikla Forest etc. The city is profoundly enclosed with tropical deciduous forests and houses amazing varieties of flora and fauna, valleys and river streams such as Kulik, Nagar and Mahananda.The name of the district has been derived from the erstwhile kingdom of the area, King Danuj. It was changed into Danaj, which was later renamed as Dinaj.

The distict forms a part of the basin lying between the Rajmahal hills on the east. Raiganj on the bank of the river Kulik is the District Headquarter, where the Raiganj Wildlife Sanctuary, the second largest bird sanctuary in Asia is situated. The headquarters of the Uttar Dinajpur district, Raiganj is a municipal town since 1951 and is one of the major trade centres of the North Bengal. The place is well-connected with the rest of the state through National Highways, State Highways and railways. NH-31 and NH-34 pass through the heart of the district.

Many tourists visit the places for its many lakes. Some tourists also opt for sightseeing trips in the forest. Burhana Fakir Mosque and the Karnajora Museum and Park are among the most visited places in the area.

Must See Places in North-Dinajpur, India 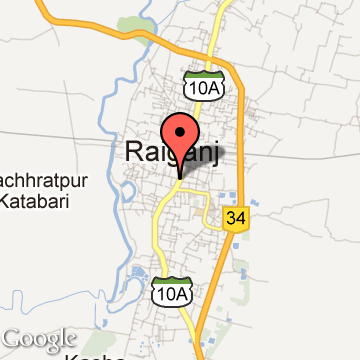