Malda with its rich historical heritage, is one of the most famous tourist destinations of West Bengal. Nestled at the confluence of the Mahananda and Kalindi rivers, Malda town, with all its grace, adds to the beauty of Bengal.

Malda town was previously known as English Bazaar. It got that name from the English factory that was established here in 1771. From Malda, you can visit Gour and Pandua. Gour was the capital of three dynasties of ancient Bengal – The Buddhist Palas, the Hindu Senas and Muslim Nawabs. Pandua once the alternate seat of power to Gour, has the third largest concentration of Muslim monuments in Bengal. Historical Monuments include mosque Jami Masjid (1566) and landmark Nimasari tower across the river. The Malda Museum has a great collection of region's architecture and anthropological specimens.

During the 18th century Malda was the seat of prosperous cotton and silk industries. The area grows rice, jute, legumes and oilseeds. Malda is also famous for its mangoes and mulberries.

Maldah district  is a district in West Bengal, India. It lies 347 km (215 miles) north of Kolkata, the state capital. Mango, jute and silk are the most notable products of this district. The special variety of mango produced in this region, popularly known by the name of the district, is exported across the world and is acclaimed internationally. The folk culture of gombhira is a feature of the district, being a unique way of representation of joy and sorrow of daily life of the common people, as well as the unique medium of presentation on national and international matters.

District headquarters is English Bazar, also known as Malda, which was once the capital of Bengal. The district maintains the traditions of the past in culture and education. Old Maldah, the town which lies just east of the confluence of the Mahananda and Kalindi rivers, is part of the English Bazar urban agglomeration. The town rose to prominence as the river port of the old capital of Pandua. During the 18th century it was the seat of prosperous cotton and silk industries. It remains an important distributing centre for rice, jute, and wheat. The area between the historical monument of Jame Masjid (1566) and the landmark of Nimasarai tower across the river Mahananda, constituted a municipality in 1867. Rice, jute, legumes, and oilseed are the chief crops in the surrounding area. Malda is the largest producer of excellent quality of jute in India. Mulberry plantations and mango orchards occupy large areas; mango trade and silk manufacture are the main economic activities. The Independence Day of Malda is 17 August 1947.

Eklakhi MausoleumA trip to Malda will be fascinating for everyone who is interested in historic expeditions. As the city serves as the tourism base to the two historic cities of West Bengal - Pandua and Gaur, it is mostly visited by archeologists and historians involved in chronological studies and surveys. It also houses a museum, which has vast collections of region's architectural and anthropological samples. Though the town of Malda itself came up only in the 18th century, with the British colonial rule, the region had been the core of power in Bengal since 7th century AD. Let's explore the tourist places in and around the city.

Must See Places in Malda, India 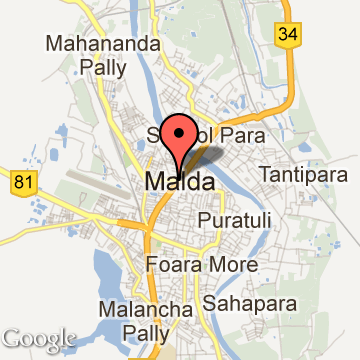