Hooghly  is one of the districts of the state of West Bengal in India. It can alternatively be spelt Hoogli or Hugli. The district is named after the Hooghly River.

Hooghly of West Bengal is associated with a number of places that have great tourism value. For Bengalis, this place has a greater significance, as it is the birthplace of the eternal Bengali novelist, Sarat Chadra Chatterjee. Hooghly is also the sacred place where great enlightened souls like Sri Ramakrisna Paramhamsa and his consort, Sarada Devi - the Mother of all; stayed for the most of their lives.

The district of Hooghly is also popular in far off places in the country because of its connection with the French, the Dutch and the Portuguese. All these three races have left their individualistic marks on the different places in Hooghly and with its headquarters at Chunchura, a seventeenth century Dutch settlement, the district of Hooghly is the only one of its kind.

The headquarters of the district are at Hooghly-Chinsura (Chuchura). There are 4 subdivisions in the district: Chinsura Sadar, Chandannagar, Serampore and Arambag.

Must See Places in Hooghly, India 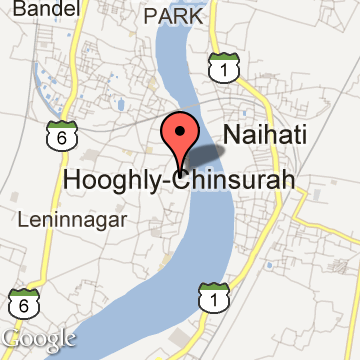