Dwarka  also spelled Dvarka, Dwaraka, and Dvaraka, is a city and a municipality of Jamnagar district in the Gujarat state in India. Dwarka is one of the seven most ancient cities in the country.Dwarka is situated towards the western-most part of the Indian state of Gujarat. Located on the tip of the Saurashtra peninsula on the Arabian Sea, Dwarka was once referred to as the Golden City.

According to legend, Dwarka was submerged in water after the death of Lord Krishna and the demise of the Yadava Dynasty. The present-day Dwarka was the Kushasthali of the ancient times which enjoyed a proud spot along the Saurashtra coast.  It is believed that Dwarka was rebuilt six times by different civilisations and the present-day Dwarka is the 7th one.

The search for the lost city of Dwarka commenced in the early 1930Â’s. Archeologists of the Marine Archeology Unit (MAU) discovered the immersed township of Dwarka during their explorations which were conducted in 1983 Â– 1990.

This submerged township was built in six sectors and its general layout corresponded to the descriptions of the golden city of Dwarka as mentioned in the ancient texts.  Copper coins, foundations of boulders, old constructions, pottery samples, etc. that date back to around 1500 BC were also excavated.

Present-day Dwarka sits on the right side of the river banks of the Gomati. Dwarka is a renowned historical and religious site and has the Dwarkadheesh Temple or Jagat Temple, which was built more than 2000 years ago. The Dwarkadheesh temple of Dwarka, built as per ancient Hindu architecture, is a five storey, ornate temple that rests on 60 pillars.

Nageshwar Mahadev, Rukmini Temple, Bhalka Tirth, Gomati Ghat Temples, etc. are some other popular pilgrim spots in Dwarka. Dwarka is also the seat of Adi Shankaracharya, who established four Â‘mathsÂ’ in four different parts of India. The Sharada Peetha of Dwarka is a famous research centre of Sanskrit language.


Must See Places in Dwarka, India

According to Hindu tradition still extant, the earliest known conqueror of Okhamandal was Shri Krishna, called also Ranchodji, the eight incaranation of Vishnu, Who after his seventeenth battle with Jara Sangh, king of Magadh Desh, fled from Mathura, and eventually arrived with his army at Okhamandal which he subjected after a hard struggle with the Kalas. Shri Krishna established his capital at Dwarka on the bank of the Gomti Creek.

Lord Krishna ordered Vishwakarma to build Dwarka. Dwarka was planned and built on the banks of Gomati River. The town had six organized sectors, like residential and commercial zones, wide roads, plazas, palaces etc and Sudharma Sabha hall was built to hold public meetings. It is said that the town initially had 700,000 palaces made of gold, silver and precious stones accompanied with beautiful gardens filled with flowers of all seasons and beautiful lakes. 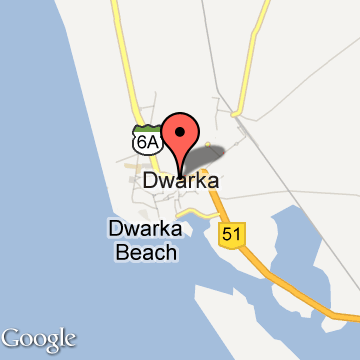