Maitland is at the heart of a thriving central business district offering quality accommodation, entertainment and dining.
The city is surrounded by pretty countryside, so enjoy strolling along the river walk precinct to admire the Hunter River, dine by the riverbank at a cafe or head to a stylish heritage pub.

Don't miss the Maitland Regional Art Gallery or National Trust-listed Grossmann House to gain an insight into Maitland’s cultural heritage. Close by are many fine cellar doors where you can sample local boutique wine, including fruit wines made from fresh local produce.

Of the major towns of the Hunter Valley, Maitland retains many historic buildings that date back to the earliest years of colonial Australia. Nearby towns that are worth visiting include Pokolbin and Cessnock.

Must See Places in Maitland, Australia

Originally Maitland consisted of three separate towns which arose roughly all around the same time. West Maitland, now just Maitland, was a privately founded town which grew because of its proximity to the river and which today is the commercial centre of the city. The other areas were East Maitland, which was established by the colonial New South Wales government, and Morpeth, another private town founded by Lt Close, a Peninsular War veteran. Each town functioned as if they were separate municipalities.

West Maitland was founded in 1820 close to the tidal reach of the Hunter River where vessels with a shallow draft could navigate. Nearby Morpeth served as the head of navigation for larger ships (later, steamships), and goods would be transhipped upriver to West Maitland on barges and smaller vessels. Originally the route river route between Morpeth and West Maitland was 26 kilometres (16 mi), today after various floods and river course changes this has reduced to just 9 kilometres (5.6 mi).

Maitland was therefore the point at which goods were unloaded for, and distributed to, the prosperous riverland of the Hunter Valley. Accordingly there were large warehouses (some of which still exist) built, which faced onto the main High Street and backed onto the Hunter River. For almost 20 years until the Victorian gold rush, Maitland was the second largest town in Australia. The arrival of the railway from Newcastle in the 1850s, coupled with the increasing silting of the river and larger ships spelt the end of the traditional river traffic.

The first electricity connected in the area was to Maitland Town Hall in 1922, to the Hall's front light. 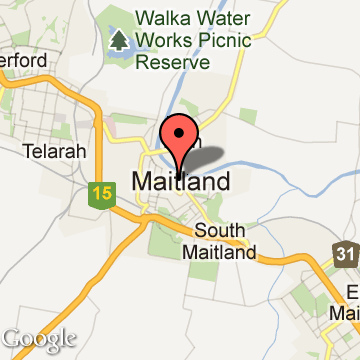